We love food. I’d say that we’re ‘Foodies’ but I hate the pretentious ring to that term so much I’d rather be called a pig. So, fine, we’re pigs. Vegetarian pigs (well, Mike is technically a pescitarian pig but I digress.) Shopping has taken a firm backseat to finding creative veggie eats when we travel as our #1 thing we love to do. Since we packed up our furry children and left chilly Denver for some time in the warmer west last month, we’ve been able to hit up some of our best-loved places and discovered some new ones as well. Don’t worry, they aren’t all just for veggies, they’re for those who just love a delicious (and fairly inexpensive) meal.

We always stop at Santa Fe Baking Co on our way to Arizona. It’s a total hot spot for locals with a mish mash of boomers, college kids, and of course the hipster crowd. It’s a menu heavy with breakfast and lunch items with a New Mexican flare. These past few times I’ve gotten the Vegan Bowl, a veggie scramble with tofu mixed in smothered ‘Christmas style’ with both red and greed chile served with 2 freshly made and nicely charred tortillas. 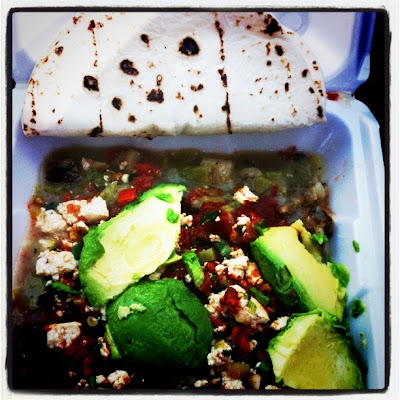 Our first stop once we hit Arizona is always Pita Jungle. It’s a hard to nail combo of nicely priced fresh Mediterranean that’s pleasing to green eaters and meat-lovers alike. Our table was overflowing (as usual) with Cilantro-Jalapeno and Red Pepper Hummus, Falafel, Taboule, tons of fresh pitas, and of course a Greek Salad. 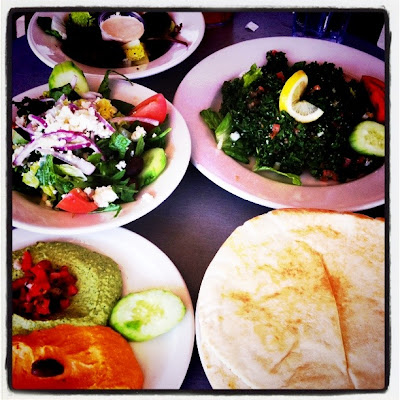 We found this hidden gem on HappyCow.net, a good thing since we drove past it every day and wouldn’t have saw it because it’s somewhat hidden in a strip mall between a Goodwill and a bike store. We ended up eating there twice, our first meal were these bowls; my spicy Asian-inspired Diabolo Red on the left, Orecciette Pasta on the right- pre-marathon fuel for Mike featuring the best  faux meatballs we’ve ever tasted. Also pictured in the back are the ‘chicken’ wings we devoured, so tangy and spicy with a perfectly chicken-ish texture. 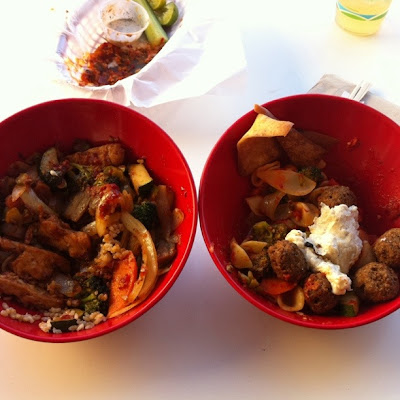 This takes us to California, where we are now. We found The Secret Spot right close by in Huntington. Apparently it’s so secret that they don’t have a website, but people are Yelping the hell out of it. It’s super casual (read: wipe down your own damn table) and sits in a strip mall behind a gas station so you can hear the not so quiet hum of a car wash behind you as you sit at one of the 3 picnic tables outside. I got the day’s special, a ‘turkey’ bowl which was served with veggies and brown rice and drizzled in some type of yummy BBQ/ hot sauce combo, while Mike ate their fresh ‘turkey’ tacos. Their ‘turkey’ is out of this world yummy, a solid faux meat that’s satisfying and free of any weird consistency. 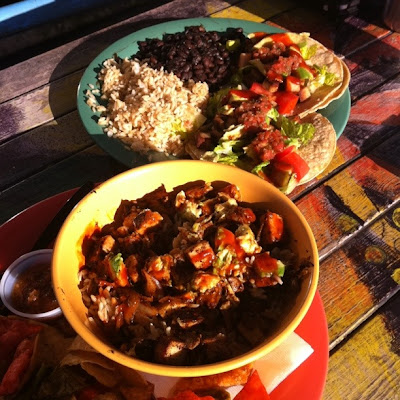 The VeggieGrill’s sharp, minimalistic aesthetic suits its concise menu and clean looking food. They do full on ‘chicken’ sandwiches, not the norm for faux meat because most of it isn’t tasty enough to make a full sandwich when it isn’t drenched with sauce to disguise it’s true flavor. VeggieGrill isn’t shy about showing off their house-made ‘meats’ so they present them in all of their naked glory, as sandwiches and on salads. They nail the consistency and flavor of an actual chicken sandwich and their kale and (divine) sweet potato fries make the perfect little sides. 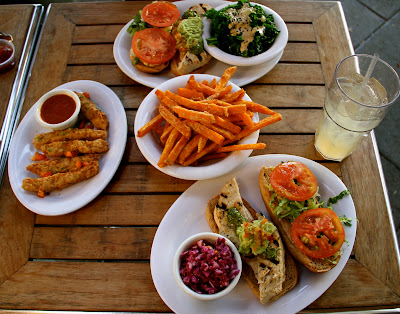 Our first True Food outing was last weekend, but it won’t be our last. This was the most exciting menu of our food adventure so far. Sweet Potato Hash and Tuscan Kale accompanied my ‘TLT’ Tempeh, lettuce, and tomato which was smokey and sliced thin to mimic the essence of bacon. I won’t pretend that it tasted just like bacon, or came all that close for that matter, but it was a fulfilling attempt that hit the spot on a flavor and texture I haven’t tasted for 5 +years. 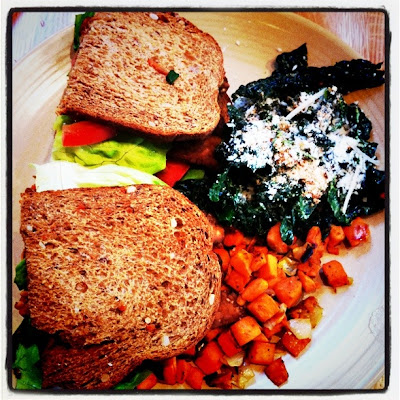 If eating veggie was filled with sprouts and beans (yuk), I wouldn’t do it. Google a veggie place in your area and try something totally new, you might be pleasantly surprised.