I swore I’d never get Botox. Needles near my eyes? Just the thought alone is enough to make me cringe, but my fine lines showed themselves prematurely due to severe burning when I was 14 so eventually I folded. I’ve ben using Botox on and off for 6 years (I’m 32). Often I’ll go a year or longer in between, but I inevitably find my way back. It’s always a struggle for me because I don’t want to go too far and look like this, but it’s difficult having wrinkles when I don’t have to and Botox is still the best way to stay wrinkle-free.

I’ve found that ‘freezing’ the face and get rid of the wrinkles is the easy part, but it’s not so easy to finesse the Botox in order to create a look that isn’t frozen or make the eyes look heavy- the common unintentional side effect that’s produced when the injector only learns how to freeze the muscles without understanding how to work with the muscle groups to add lift to the brow .

My last few Botox experiences left me frustrated by how my eyelids appeared. There were a few months where I looked older, tired, and maybe a little worse than if I’d just let the wrinkles be. I’d received Botox from 5 different people, and none of them mentioned lifting the brows or how to keep mine from falling.

I found out about Dr. Sam Assassa (Dr. Sam) through his PR rep and in full disclosure they offered me a discounted rate on Botox. We agreed (as with anything I write about) that if I liked what he did I would write about it and if I didn’t, I wouldn’t.

I visited Dr. Sam’s modern Beverly Hills office in February and was greeted by his very sweet, hottie receptionists (a requirement in the biz I suppose). He asked me all about my prior experiences with Botox and we chatted about my often droopy brow. Here’s a photo I took in March of 2008 to show how heavy my lids looked after Botox. It lasted for a few months and went back to normal eventually. See what I mean? My forehead was wrinkle-free, but this was what happened to my eyes every time. 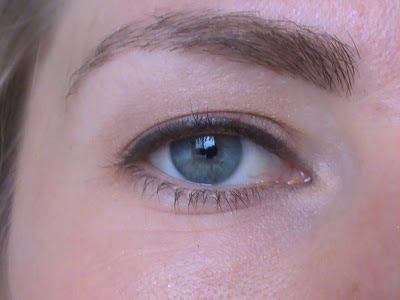 Here’s a recent pic (untouched of course) so you can see how not having a heavy lid makes all the difference. It’s not a close-up photo, but you can see how that eye is supposed to look. It’s also a shout-out to Latisse. Wow. What a difference in my lashes. 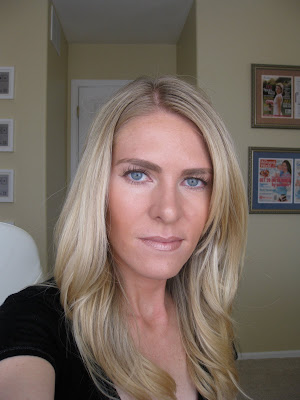 Dr. Sam understands Botox as not just an injectable to freeze muscles, but as a lifter as well, something I didn’t know was possible. He told me that he’d much rather see me with a few wrinkles than with a heavy lid- I agree.

He injected around my eyes for my crow’s feet, then right on top of my brow area to add lift to my eyes. He had me raise and lower my brows so he could see where that big muscle was, then he injected it as it was raised and pressed the Botox into the surrounding area. It did give a more lifted look to my eyes that (as you can see) isn’t harsh or ‘done’ looking. Nobody noticed the change (good, I don’t want something extreme), and I thought I looked rested and awake.

I went back a week later for a few more injections in my forehead. He wanted to see how the initial injections would settle to see if I even needed more. He cautioned against doctors who inject a large amount of Botox at once (what mine had always done) because you can’t predict how it will all take and that’s when you start to get problems like heavy lids and a face that doesn’t move.

The result was a natural looking forehead that had plenty of movement and far fewer lines. I opted to trade the glassy-smooth forehead (which looks weird anyway) for some natural movement and wider eyes. A few lines remained (because I wanted to retain some movement), but the major ones were gone. It was a better, more comfortable look that felt more line me. Dr. Sam has been working with Botox for 10+ years and knows what he’s doing. He taught me a lot about what Botox can really do and I’m very pleased with the result.

I sent him a few questions to answer about when to get Botox, and how to find a savvy doctor who isn’t freeze-happy, and here’s what he had to say.

Portions of his answers were edited down for length and clarity.

Q- This is the first time in the 6 years I’ve used Botox and my brows didn’t sag afterward. How can women find a doctor who knows how to add lift and not over-do it?

A- The most important factor is to find a doctor who knows how to create a balance between the ‘lifter’ (the only muscle that lifts in the upper face is the forehead muscle or ‘frontalis’) and the depressors or ‘downers’ (frown muscles, and orbicularis muscle that makes you squint). Both are very strong muscles, so it’s important to weaken them [properly] and allow the forehead muscles to work at ease.

If you want to to inject Botox in [your] forehead you should use a very small amount. I decide this by carefully examining the patient and their muscles dynamic so I can plan properly. I always say to the doctors and nurses I teach that “Botox injection is a dynamic procedure… it’s an art.” You need to have the patient use their facial muscles, decide where to inject and how many units  before you start. If you properly analyze the muscles [first] then your task becomes easier and the results will be outstanding.

Q_ I usually tell women that they shouldn’t get Botox unless they start to see
lines when their face is at rest. Is there a guideline for when women should
consider Botox?

A- When [wrinkles] happen it’s already too late, they could have been prevented by using Botox sooner. Botox works well for dynamic wrinkles or lines (wrinkles in motion) lines that get accentuated or appear when using the expressive facial muscles. In fact there is long term benefit of starting botox early (late 20’s to early 30’s) because it softens those lines and prevents them from getting deeper, improves skin texture, reduces large pores, and prevents skin aging. So it’s very important to keep up with Botox on a regular basis (every 3-4 months) to reap the long term benefits of Botox.

Q- What was it you did that made my eyes look lifted and awake? What should women ask their doctor to do to get that same result?

A- Ask for an Eyebrow Lift. By weakening the orbicularis (muscle around the eye) and allowing the opposing lifting muscle to work at ease you create eyebrow lifting and wider eye corner.

Q- How can women find someone who is good at giving Botox? I’ve been to 5
different people who had great experience and were well recommended but they
weren’t very savvy.

A- Search and research, reviews, blogs, credentials, and testimonials.

Side note from me- only see a doctor and ask first if they’ve used Botox for brow lifting. It’s not as common as you’d think.