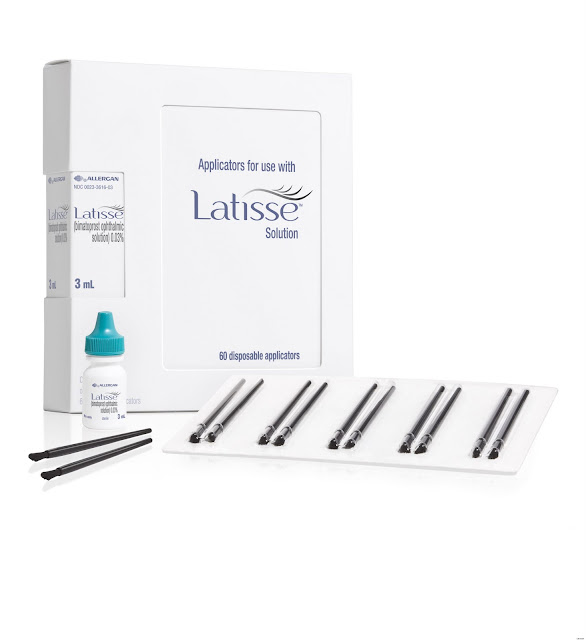 Of all the questions I’m asked, the most common one is about Latisse- well, maybe not directly, it’s usually more like, “Are you wearing false lashes,” or “What mascara do you use?” Of course I’m not wearing false lashes, and the mascara has little to do with the overall appearance of my lashes, it’s simply the growth from Latisse that they’re (always) noticing.

So is it safe?

We know that its main ingredient was first used to treat glaucoma, and the side effects of that treatment were lash darkening and growth. During the course of that treatment, patients irises would sometimes darken from a light color to brown which is permanent and irreversible- but the treatment solution for glaucoma was put directly into the eyes versus very sparingly along the lash line like directed for Latisse users.

Could it happen? Yes. Is it likely? No.

Anything is possible, but from my understanding you’d have to get quite a lot of the solution into your eyes repeatedly in larger quantities for this to take place.

I use it, I trust it, I like it. I do have some minor itching from time to time after I apply it, but it’s so minor that I didn’t even take note of it until I read that it was a possible side effect.

Like they say with the hair on your head, hair length could be largely predetermined by genetics. Some people just can’t get their hair to grow no mater what they try. My lashes grew to a certain point, then plateaued- same with thickness, so don’t worry about growing lashes so out of control they reach circus proportions. I saw a big improvement really quickly, and now I’m at a maintenance phase to keep what was created.

How long does a bottle last?

The bottle I bought in March just offered its final drop last night, so about 8-9 months. Although they’re specific about its application, I’ve found that just 1 drop into the bottle’s cap makes a little pool of liquid easily absorbed by the brush which is enough for both eyes, so I use about half of what’s suggested with the same great result.

It works. It’s worked for me and countless other women, but talk to your doctor to see get their take on it and see if it’s right for you.