We didn’t want to leave our first dreamy destination with a small reservoir where we paddle boarded and kayaked 3x a day, but we had plans to head to another site so off we went.

We packed up the RV to switch sites for the first time. The hardest part was packing up everything that was filthy only to unpack it an hour later. Typically, we’d head home, clean everything, and start fresh so this was tricky. It came with the realization that there’s no great way to wash things when you’re on the road. No washer/dryer, no long showers to scrub the dirt off of 5 people and 3 mud-covered dogs, there simply isn’t enough water for that. You just do your best and keep on going until you’re back home and spend days cleaning it all. Dogs included.

An hour after packing up, we landed at Horsetooth Reservior in Ft. Collins, Colorado where Mike went to college. He was excited to drive through the town and show the girls places he went and where he lived. So much had changed of course. We wanted to drive through campus but didn’t get to it this time.

The sites were laid out in a row that lined a sort of cul-de-sac along the water close by the marina. The sites were slightly staggered so you weren’t eye to eye with the next camper, and we parked our truck to block off one side but I wouldn’t call it private. This was probably my least favorite site we’ve been to so far. Horsetooth has little inlets throughout the long reservoir where you can camp, we were at Inlet Bay. Ours was the last site left that had opened up when I planned this trip last minute. We had been planning since March to go back to Steamboat Lake because this was my birthday weekend (pre-pandemic when that sort of thing still mattered!) but when we went a few weeks ago, we saw that the site we booked was overgrown with no view, so I put together this trip instead. We were lucky to have gotten what we did so last minute, but I wouldn’t stay in this particular area again.

We also had no idea that the day before we arrived, there was a boat explosion that injured 6 and would’ve been visible from our site. Apparently they were starting their boat when it exploded and they had to jump from it to avoid the flames. One was airlifted to the hospital. I don’t think there were fatalities but wow, to have that happen the day before we arrived is pretty crazy.

For our first day, we just took it slow, unpacked, and got comfortable in our site. We were very close to the water so it was easy to walk down, but it was pretty rocky and muddy which made it less than ideal, but it was nice to be so close. The girls didn’t complain or even notice that the beach wasn’t really usable, they actually squished around in the mud the last day completely unfazed. 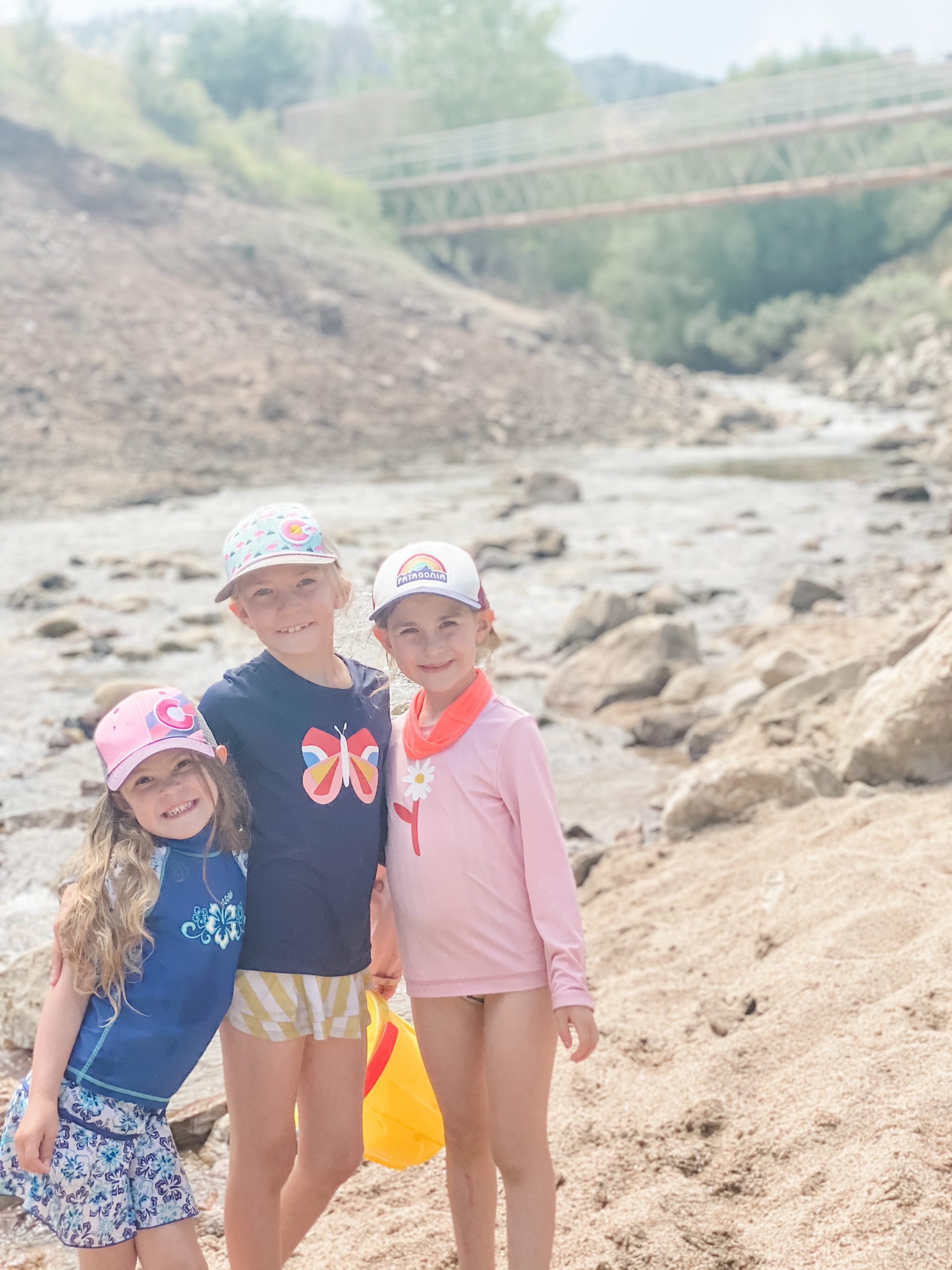 The biggest hit was walking about 40 yards from our site to where a little stream met our inlet. The girls loved climbing rocks and crossing over with Mike. The water wasn’t too fast and pretty shallow so they threw rocks and splashed around for hours. It wouldn’t have registered as particularly worthwhile to Mike and I, but I think with the ages our kids are, anything water is a hit. 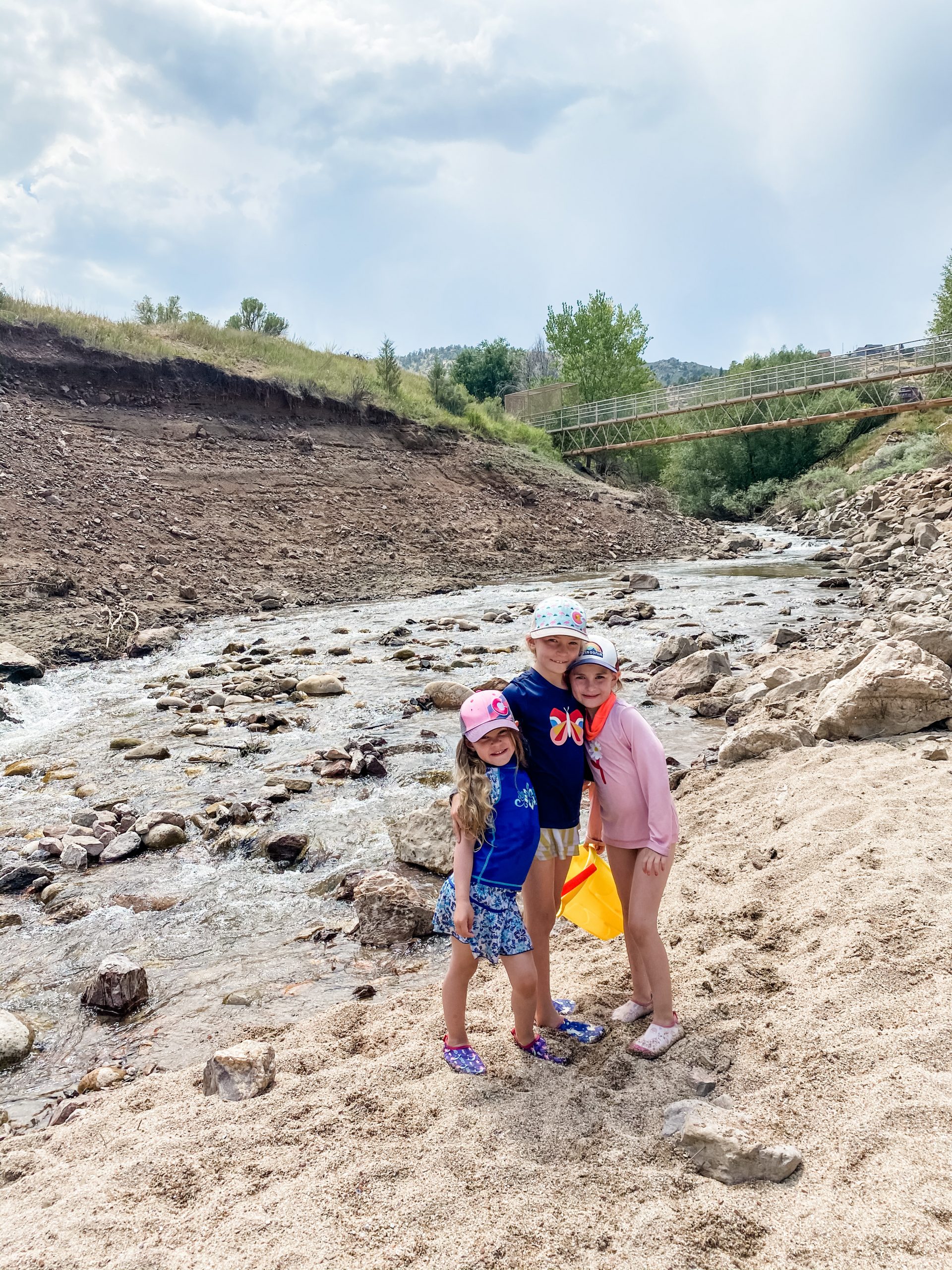 It was also incredibly hot in the high 90’s. Since we weren’t in the mountains, it never really cooled, even at night, so we were happy to be in the water, and then take a break late afternoon with some learning and reading. I didn’t bring anything formal with us on this trip, so we did workbooks and we read. We’re currently reading Beverly Cleary’s Ramona books which all 3 love. This time was when we would have a snack and cool down inside the RV while Mike got some work done in the screened-in canopy that we put over the table outside. This setup seems to work best for us and gives Mike quietest place to make calls. He was hot of course and again, it isn’t ideal and takes some getting used to but it’s all part of the adventure. When we first got our RV I would watch YouTube videos about families who would travel and school in an RV and wonder where everything happened and I never really saw how anyone worked. I get my words down at night when we camp. Every night as the girls are going to sleep, I get our my laptop and just outline the day. Mike gets time in here and there but nothing solid and often pays for it when we’re home with late nights and lots of catch up. We’re also trying to figure this out, how to sustain during longer trips. We get better each time but haven’t mastered this all yet. 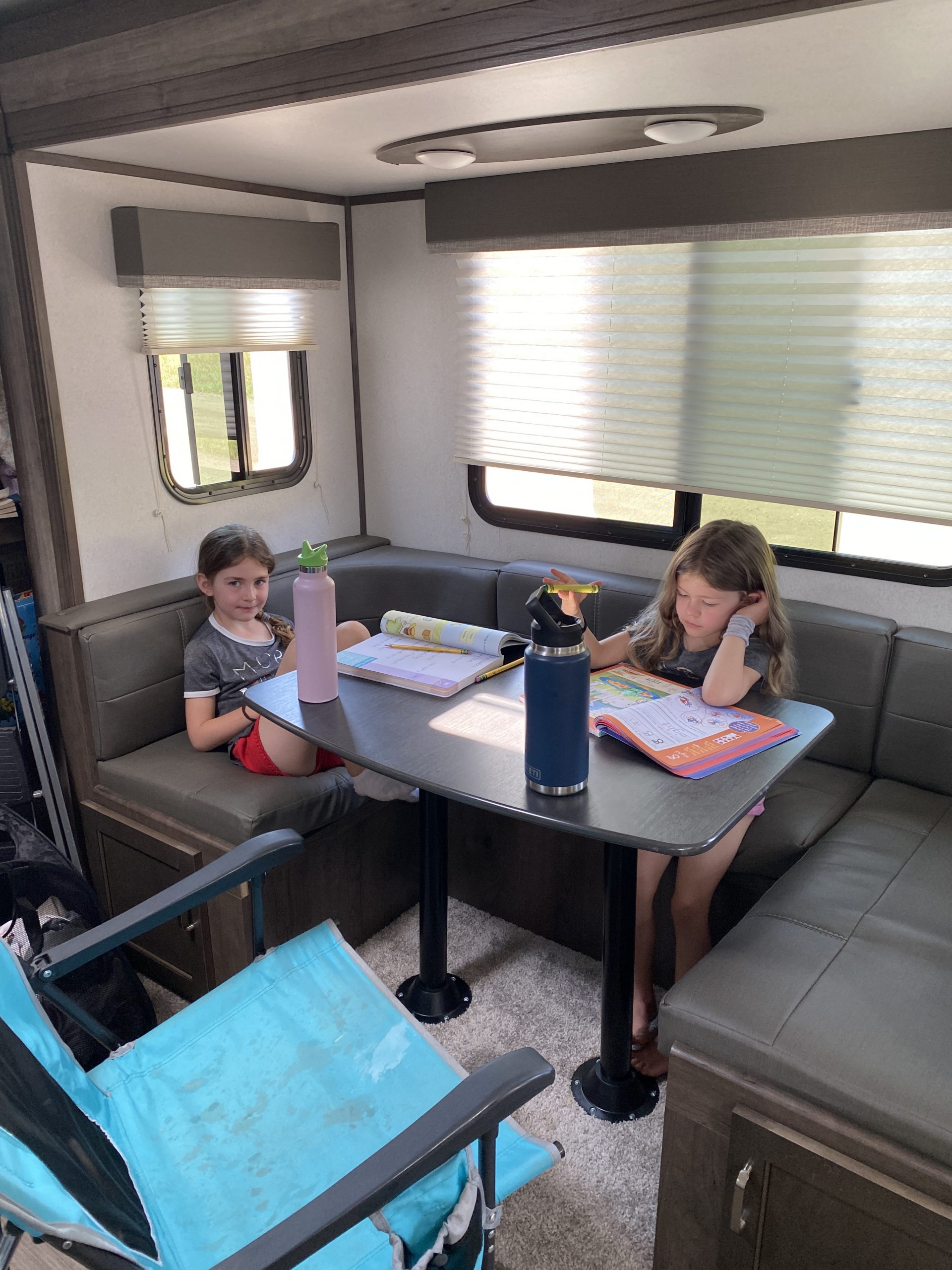 We also rented a boat which turned out to be a blast. We’d never been on a boat together but the girls took right to it yelling for Mike to go faster. We had a tube where they each took a turn riding with Mike which meant that when it was time for their turn to end, one of the girls had to steer the idle boat just to make sure we stayed facing the right direction since the lake has rules about which way to go, the other held up the flag, and I had to pull Mike and whoever he was with back in. When I was driving, I was also careful not to launch anyone, especially Lola who was very nervous and kept yelling for me to slow down. It also started to rain so we headed back to the marina, but then it held up so we could finish our window which was a relief. After this, everyone asked if we could get a boat. The answer was no. 😂 But it’s nice to know we can just rent one from time to time. 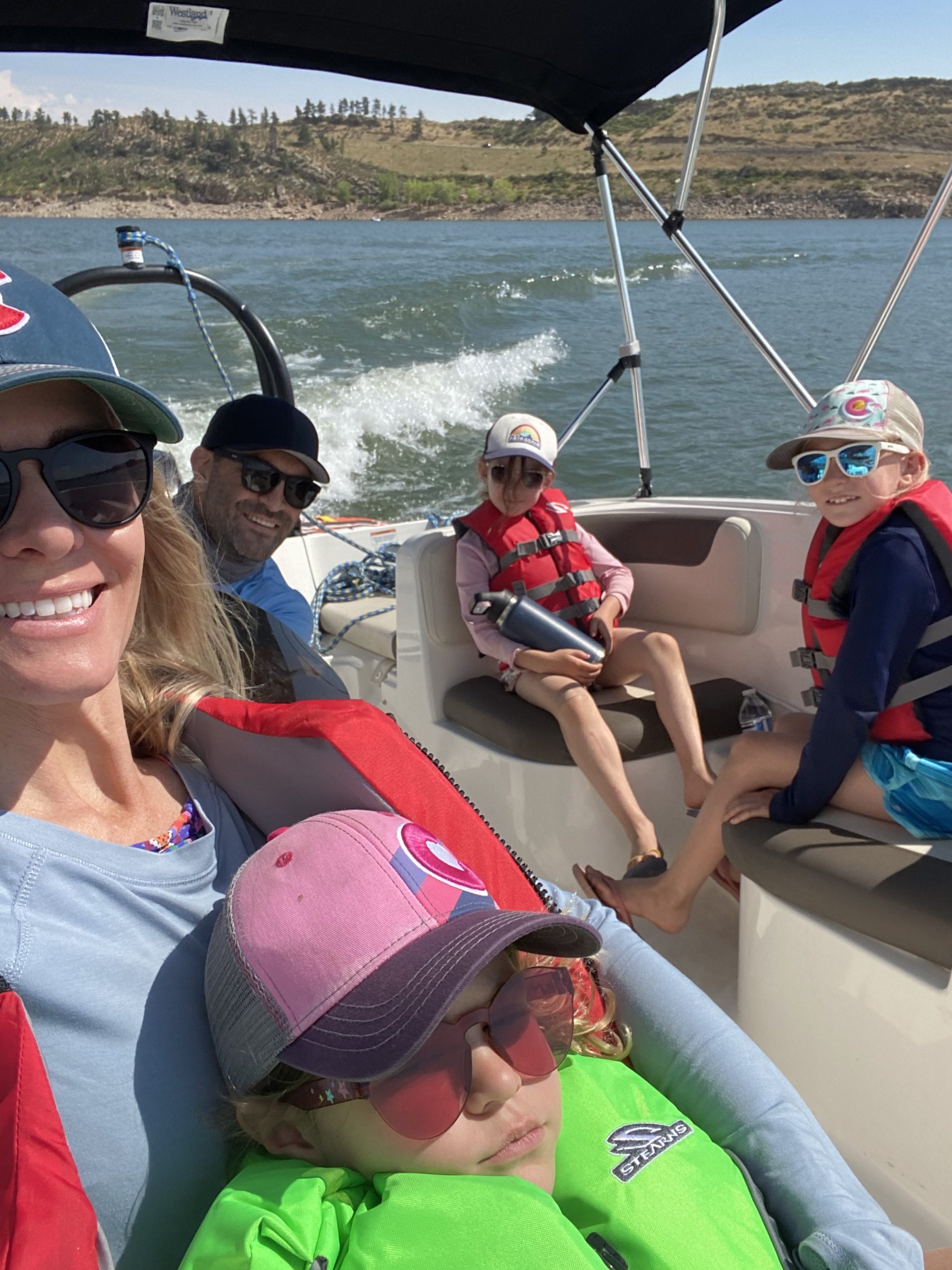 At dinner we do this thing called carrots and sticks which is the best and worst part of your day. The ‘sticks’ from our trip included having to take full showers because we were filthy and using all of the water dry. We were just hooked up to electric but there was a water and dump station nearby so we wanted to test a little and see what our capacities were. We found out that our combined 9 feet of hair drains the tank so we loosely hooked up, dumped, and refilled the water. I wanted to drive the probably 200 feet back to our spot and pull in just to see that I could especially since it wasn’t a back in. As I pulled through the first time we saw that there were several deer with their heads in our dog kennels eating the dog’s food which we foolishly left out without even thinking about it since we weren’t gone that long. They also ate an entire bag of chips that were left on a chair. I was thankful they didn’t leave anything behind 🥴 but they were almost impossible to scoot away and were happy to finish their snack while I completely messed up the entry. I pulled around the end of the site, and tried to pull through again. After 3 more failed attempts, all of the girls were sleeping and I finally just jumped out and let Mike park it. We laughed through it thankfully, but the whole ordeal took hours when it should’ve only been a fraction of that. We wasted a night basically. Our other carrot was as we were packing up to go the people next to us arrived in a cloud of smoke Cheech and Chong style and smoked their way through unpacking while the girls kept asking loudly if there was a skunk nearby. I think we would’ve had our first experience with a more rowdy crew next to us which we luckily missed out on. Now that we have kids, we just pray for quiet people to be next to us. 😂 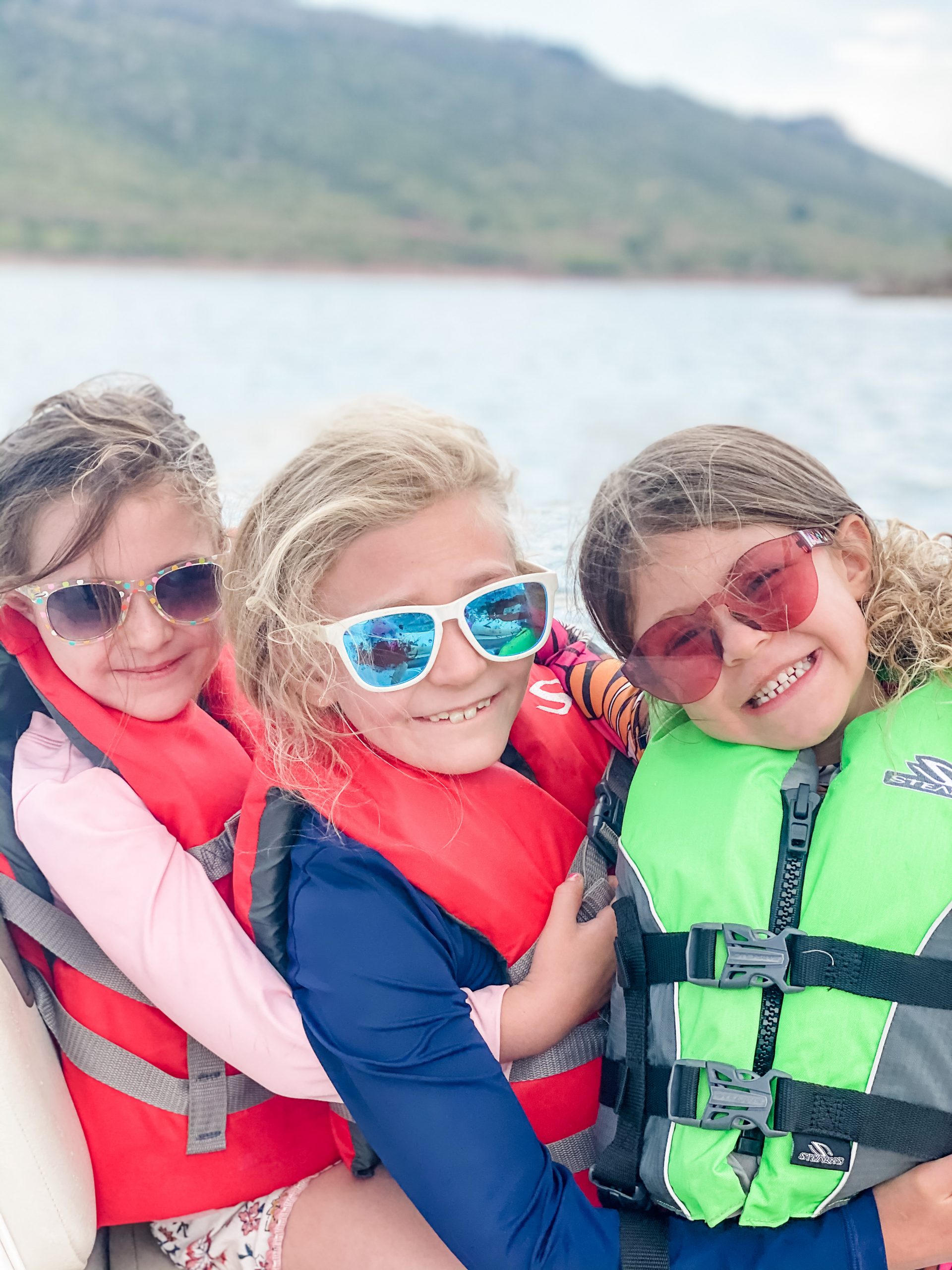 So on this trip we went from our first ideal location, on to a perfectly mediocre one, so it was nice to see that we can still have fun and make the best of it no matter where we land. Even a not so great camping spot is better than being home and in the days when we aren’t traveling (like this week because of the fires), we miss it and wish we were out somewhere. 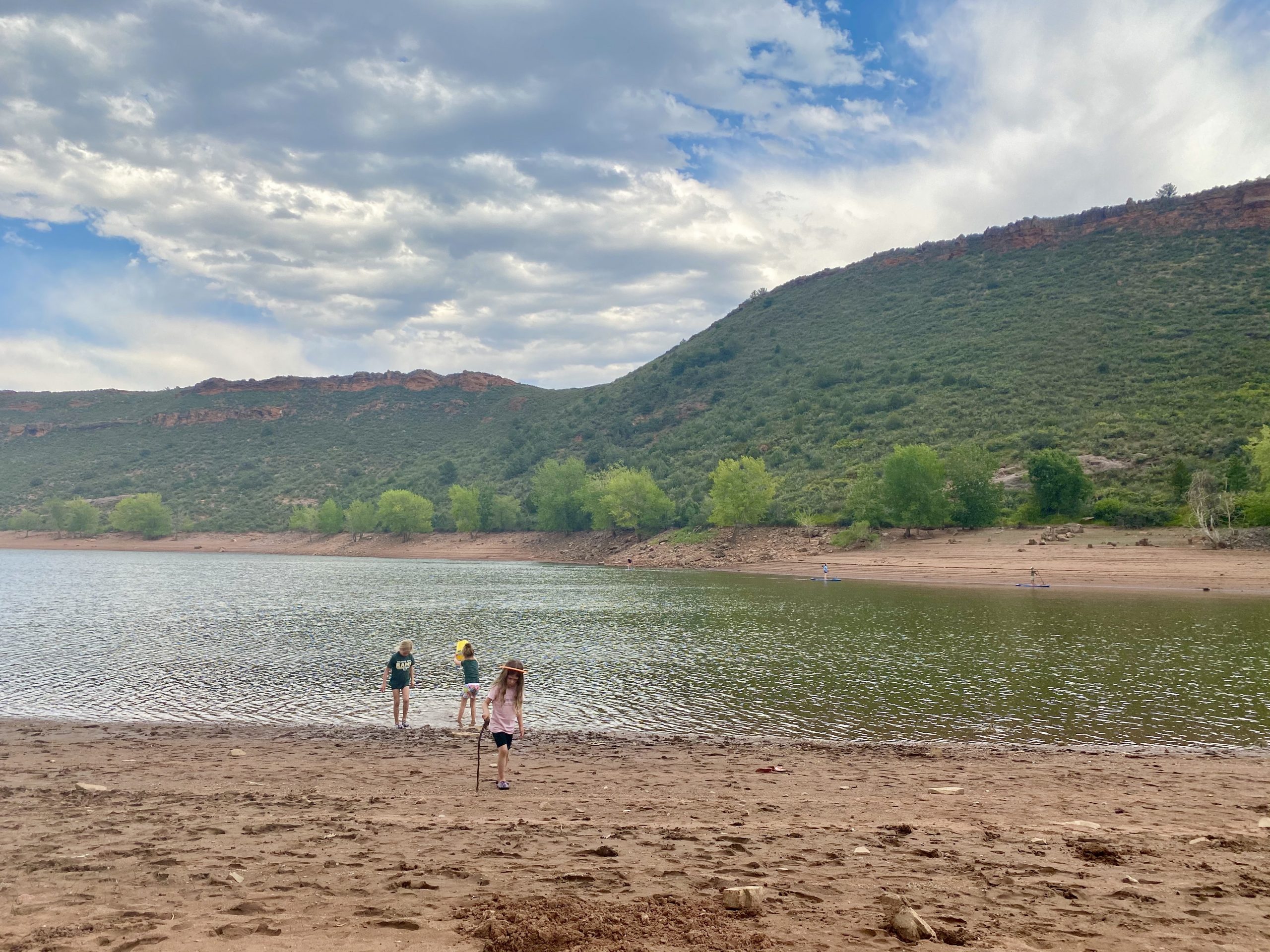 With every trip we’re sharpening our skills and getting better at predicting challenges because we’re still so new at all of this. ‘School’ officially starts next week so I wanted to be home and establish what that will look like exactly, then we’re gone for the better part of a month.

I’m just finishing up our camping essentials post which keeps evolving. Look for that soon along with a few indie beauty lines that give big brands a run for their money. ✌️