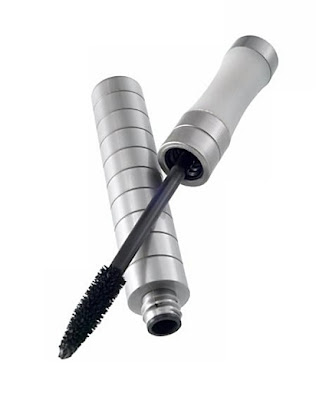 I try a lot of different mascaras. I would hate to even guess a number, but 35+ would be a nice safe bet. Most that I’ve tried are in a C range- totally average, with slight variances in brushes and formulas but in many cases a mascara is a mascara.

Fast forward to 2008 when my long battle with mascara smudging was finally won using formulas from Clinique and Stila that would stay in place until washed away with warm water specifically. Don’t get me wrong, I love the idea of no smudging even in the heat after a long day, but washing it off at night was a 5 minute process since it comes off in clumpy stages and the water had to be pretty warm to work.

Now fast forward to June 09 when I first ventured to try False Eyelashes, a best selling mascara from Prescriptives that I knew had a cult following. I tried it on a day off when it didn’t matter and headed to hot yoga. Now, this isn’t a waterproof formula, nor does it boast of its lasting capabilities, so I fully expected it to be running past my cheeks given the sizzling temperature. But it wasn’t- it didn’t budge, and washed off easily, which wasn’t even the best part.

I didn’t realize how much I missed a really dense brush, one that grabs a hold of your lashes and separates them in a way that appears, well, like false eyelashes. One coat replaced my usual three, and the satiny finish brought a new life to my eyes.