The week in-between our last trips was an eventful one. We decided unfortunately that we had to sell my car. The car we put research into when we found our RV knowing that it would pull. The salesperson at the RV center said it would (NEVER believe someone who’s trying to sell you something) and weight-wise, the numbers added up. There is a lot more to it though, and when we were climbing hills that weren’t even that steep, my transmission would go crazy, the car would slow way down, and my engine would get super hot. It just wasn’t safe. Mike’s car didn’t have the braking system we needed to pull, so we said goodbye to my car that served us well and got a truck. (I moved into Mike’s SUV which is the same size as mine was.) Trucks, as it turns out, are as difficult to find as RV’s since the two go hand in hand. Also, at the dealership we brought Dolly Parton, our 8lb dog. When the girls and I left our car briefly to check out the truck, we left it running with the AC on for her and within minutes she locked the door from the inside *again*  for the 2nd time in as many weeks and we were stuck outside for 35 mins in the near 100˚ heat while 2 different people had to get some contraption to unlock us. I swear we’re a traveling circus.

So here we are with our new (used) diesel truck that easily pulls the trailer up passes and feels so much safer. The loss of space in seating is felt especially with 3 kids and 3 dogs, but it evens out since the cooler and things can now go in the trailer or back of the truck which is awesome for additional storage. I’ve fallen clumsily out of the truck several times misjudging the height. It definitely drives more like a truck too, but it’s a safer way to go and I’m glad we made the decision we did. 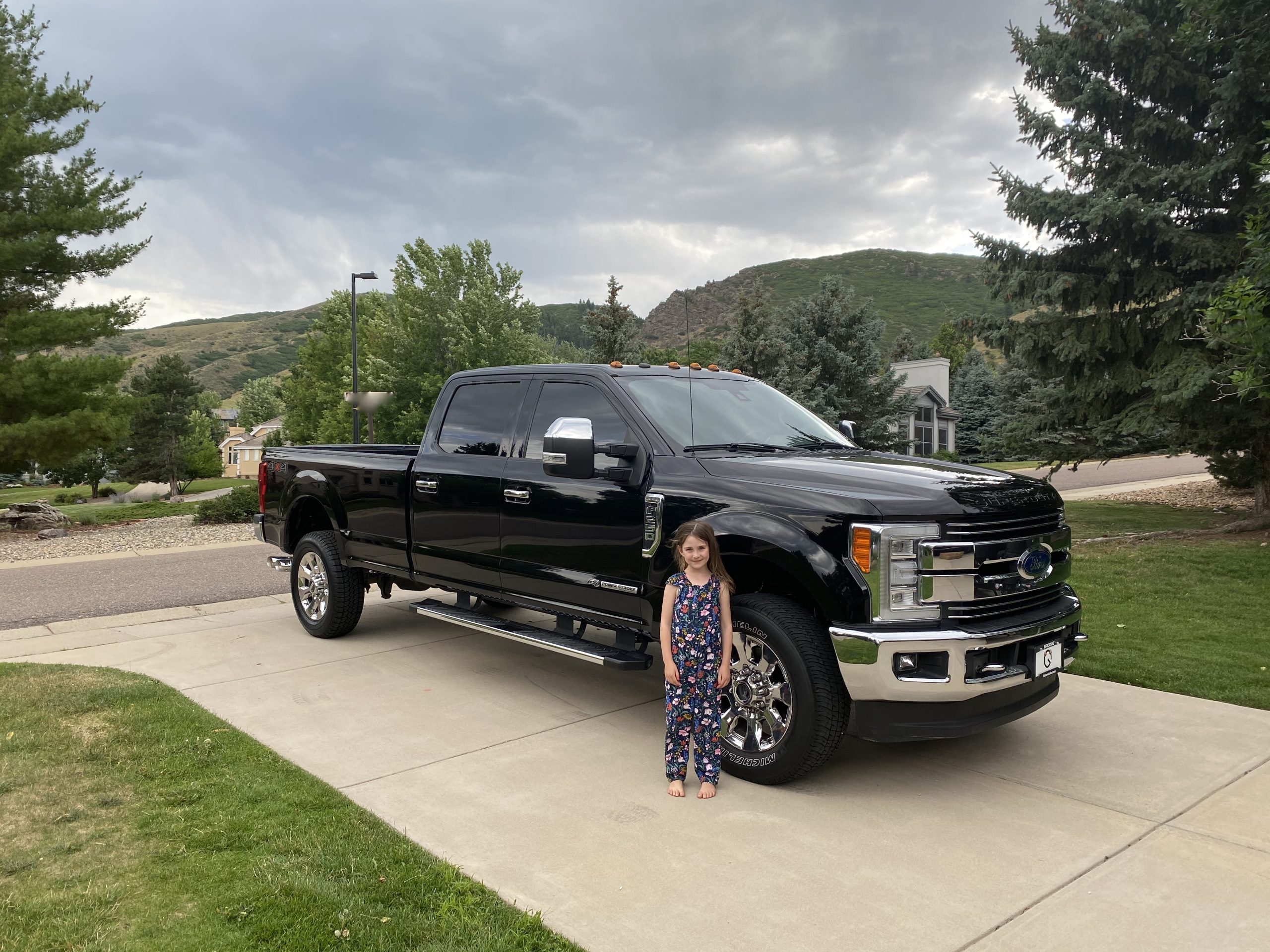 I have really noticed lately that what we’re doing has touched people by the amount of inboxes, texts, and calls I’ve received from people I know as well as total strangers. For about 4 years before I had Harper, I would do beauty segments on our local TV station as you may remember. Someone I used to do these segments with is an anchor at that station and saw on my Facebook how we were remote learning and having some RV adventures so she asked if they could profile us for a segment. We welcomed in a camera, answered a bunch of questions, and showed them our little work space in the camper. The girls loved it but Lola was surprisingly shy to the surprise of everyone. Everly was pretty quiet too, but Harper was such a natural and did a great job. She’s at the age I was when I decided to go into broadcast, so it was pretty cute to see that little spark. 💫 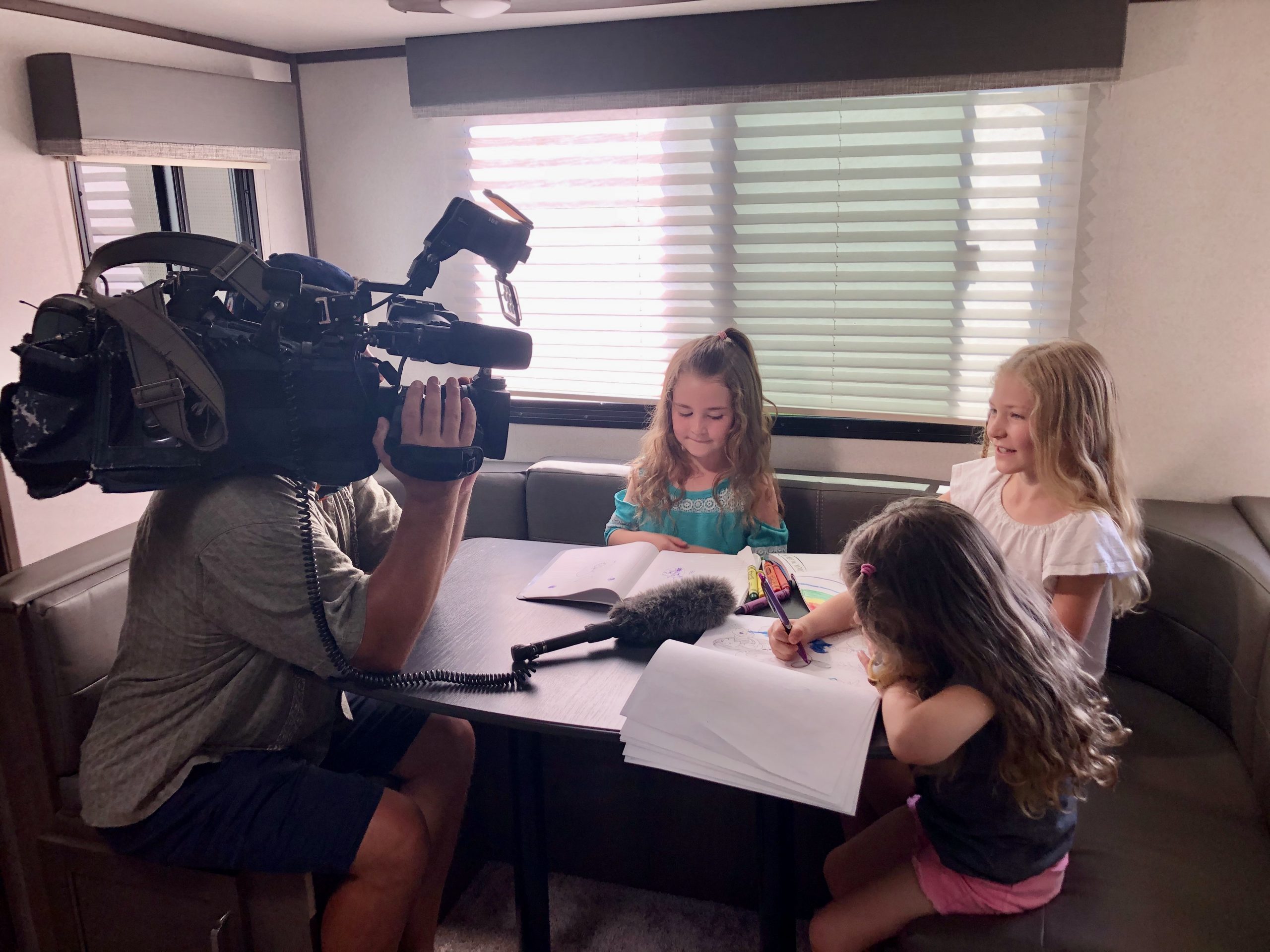 Then we set out for Steamboat Lake, a trip that I planned March 1st, pre-pandemic with hopes of renting an RV and trying camping. I have no idea why I did this since we had never camped as a family nor had Mike and I ever camped in the 20 years we’ve been together. It was on a whim, but one that really paid off. It turns out this is a hard to book location, and a really popular destination – for good reason. The setting is as majestic and perfect as it gets, with beautiful clean water, spaced out sites, and electrical hook ups with a dump station and water nearby just in case you need it. This was the view from our site which I just loved. I wasn’t able to capture the beauty of where we were because it was just so vast. Every where you turned, it was scenic. 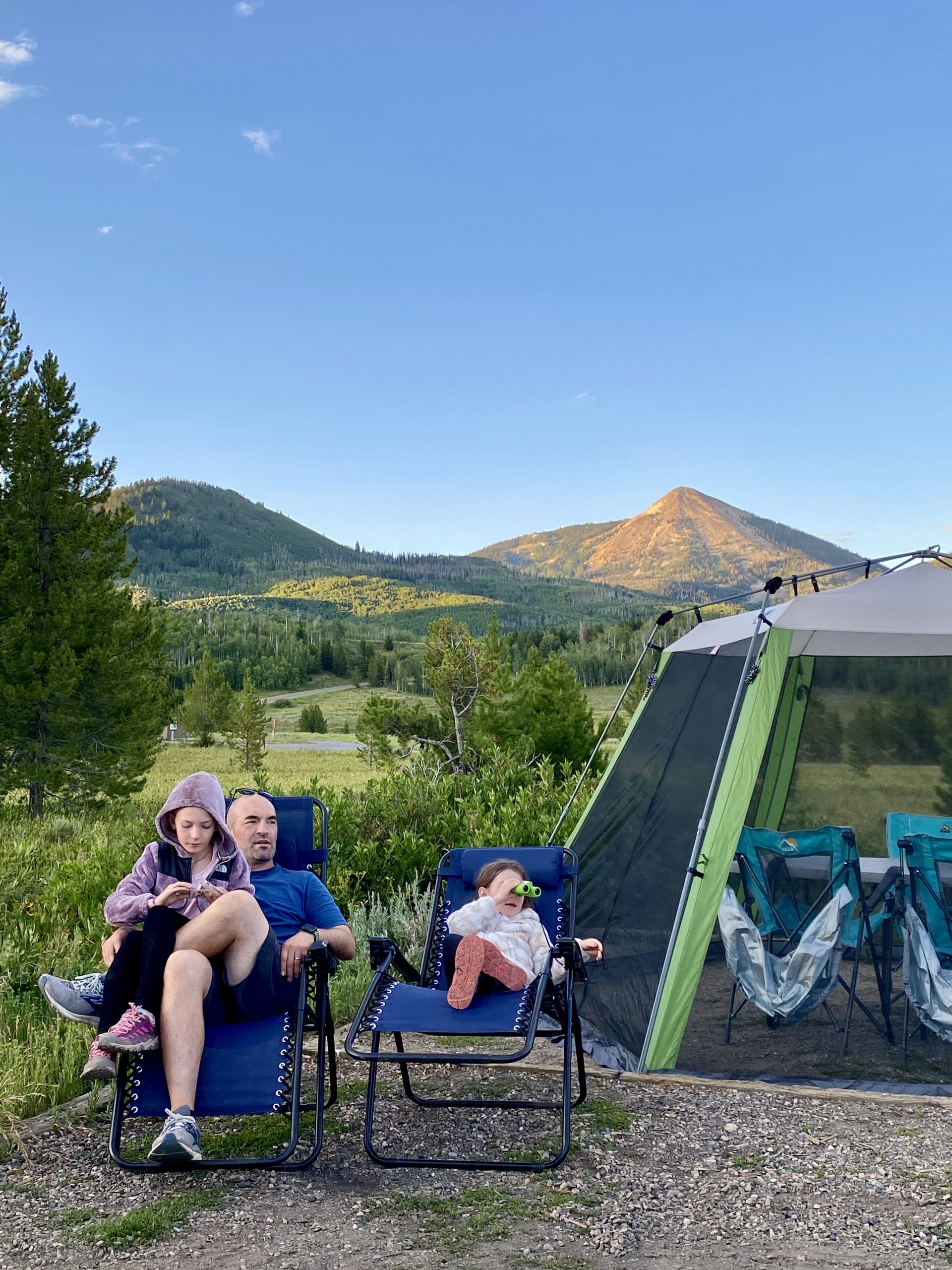 My girlfriend from middle school sent me this tee which is like one she also wears when she camps. It reads ‘Billy Bob ❤️ Charlene’ from the song ‘John Deere Green’ which you probably don’t know, and that’s fine. I paired it with ‘jorts’ and decided to embrace the whole lifestyle. 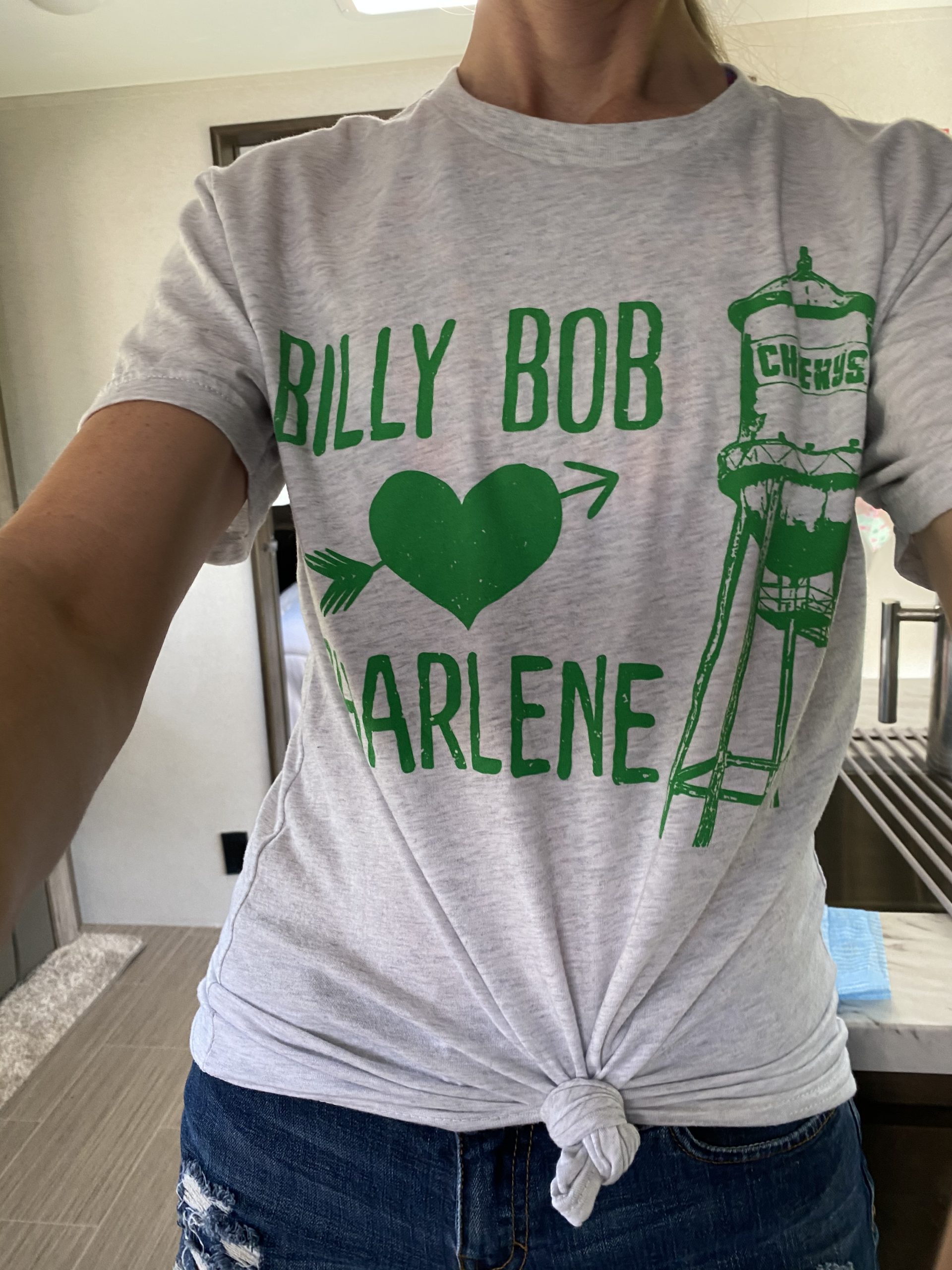 We set up our amazing screened in tent around a picnic table and just sat at the marina with our feet in the sand all day long. We forgot our sand toys in the garage at home so the girls made due with 1 plastic cup and spoon each. 🥴 We rented a kayak one day and a SUP another. Mike would take one girl at a time out on the water while I’d hang with the other two. The beach was busy, but not overly crowded and it was easy to find a little area all our own. 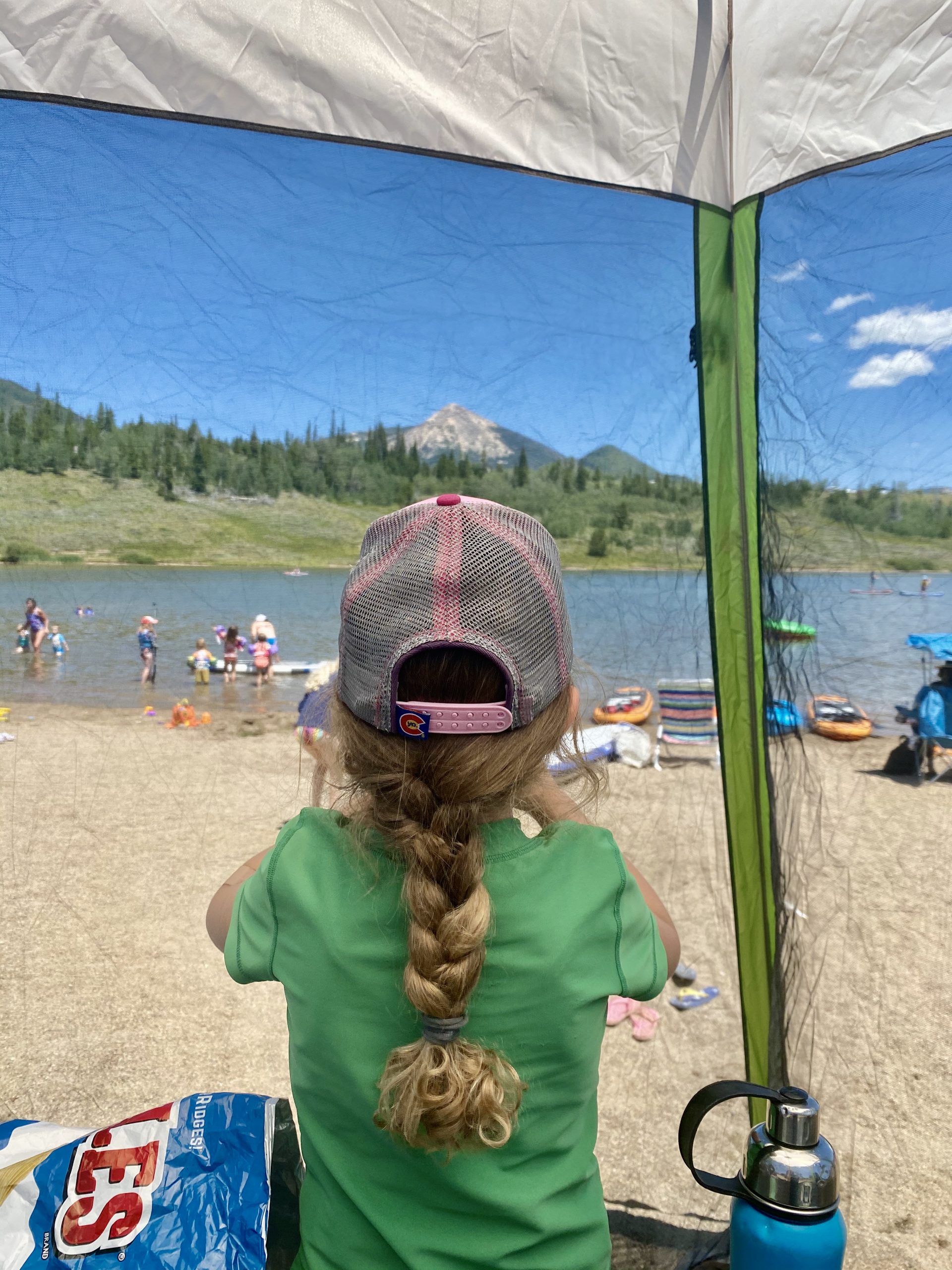 What I do find is that our girls wear out after the days upon days of constant heat and activity. They are still little, and we’re out of practice from the constant go-go-go hamster wheel we were on until March. Until quarantine, I didn’t sit down until dinner, but now it’s just a different pace. I’ll have a ‘quiet time’ for them around 3ish (like I do here) where the girls can read or nap, they take downtime in their beds. This usually leads to a group nap which, in turn, leads to a 9:30pm bedtime. It’s a trade off but a good one when we’re camping because we have some fun things we can do to fill time. Like, watch a movie! 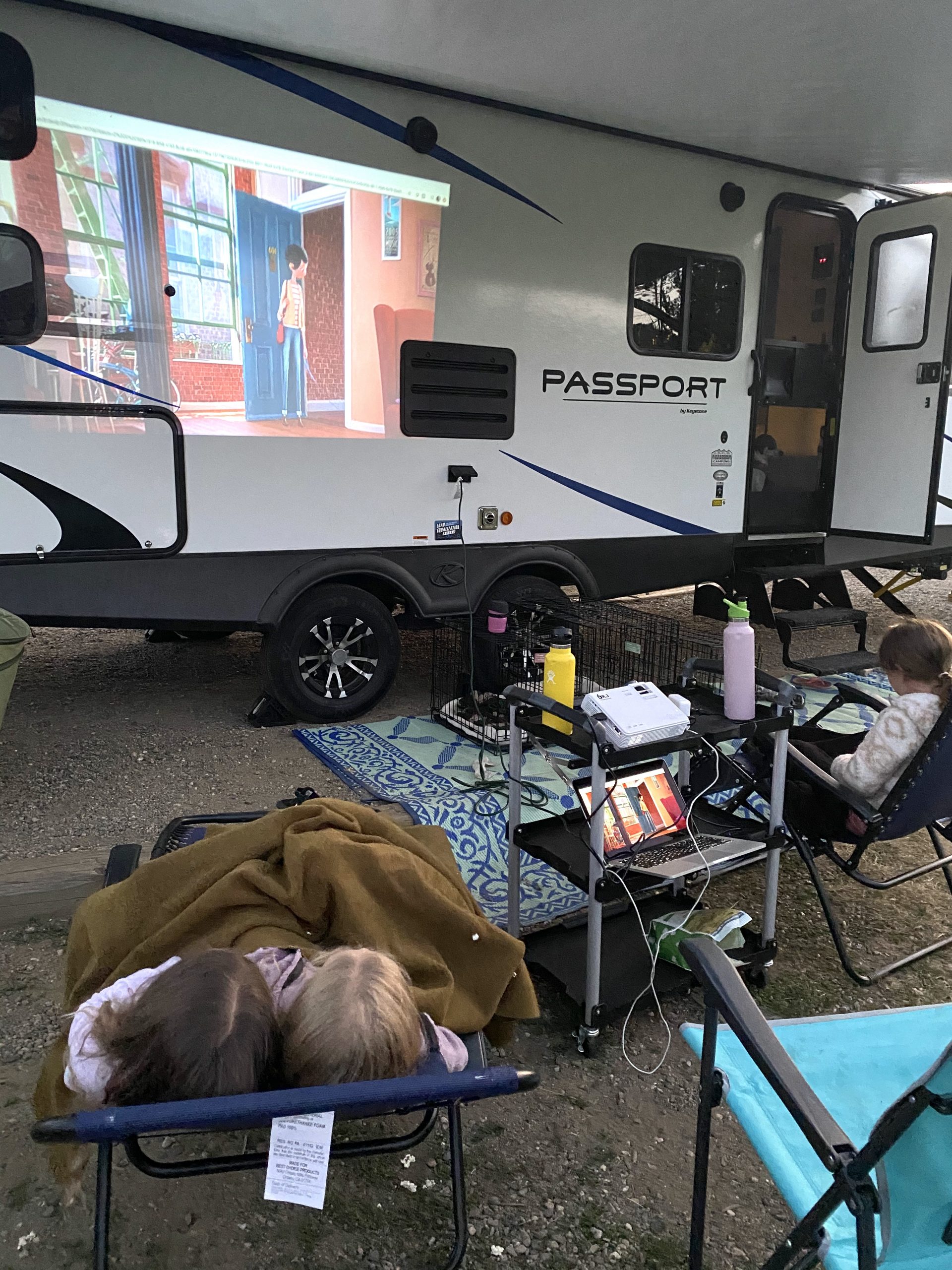 We brought up our projector and watched a movie against the RV. We downloaded the movie before we got there which is key so we didn’t have to stream it. We popped popcorn (in a bag 😂) and Mike and I played gin while the girls snuggled up and watched Secret Life of Pets 2. When they’re little like this, the small things are just as fun as the big things are. I loved this night. It felt easy and Mike and I got a little break to play cards and just chat. Our site neighbor walked by during the movie and said,'”Hey, that’s cheating,” half in jest. He was about 65 so I assumed he didn’t remember how constant the pace of the day is when your’e raising kids this age, especially when camping. For Mike and I, this time together was a gift. 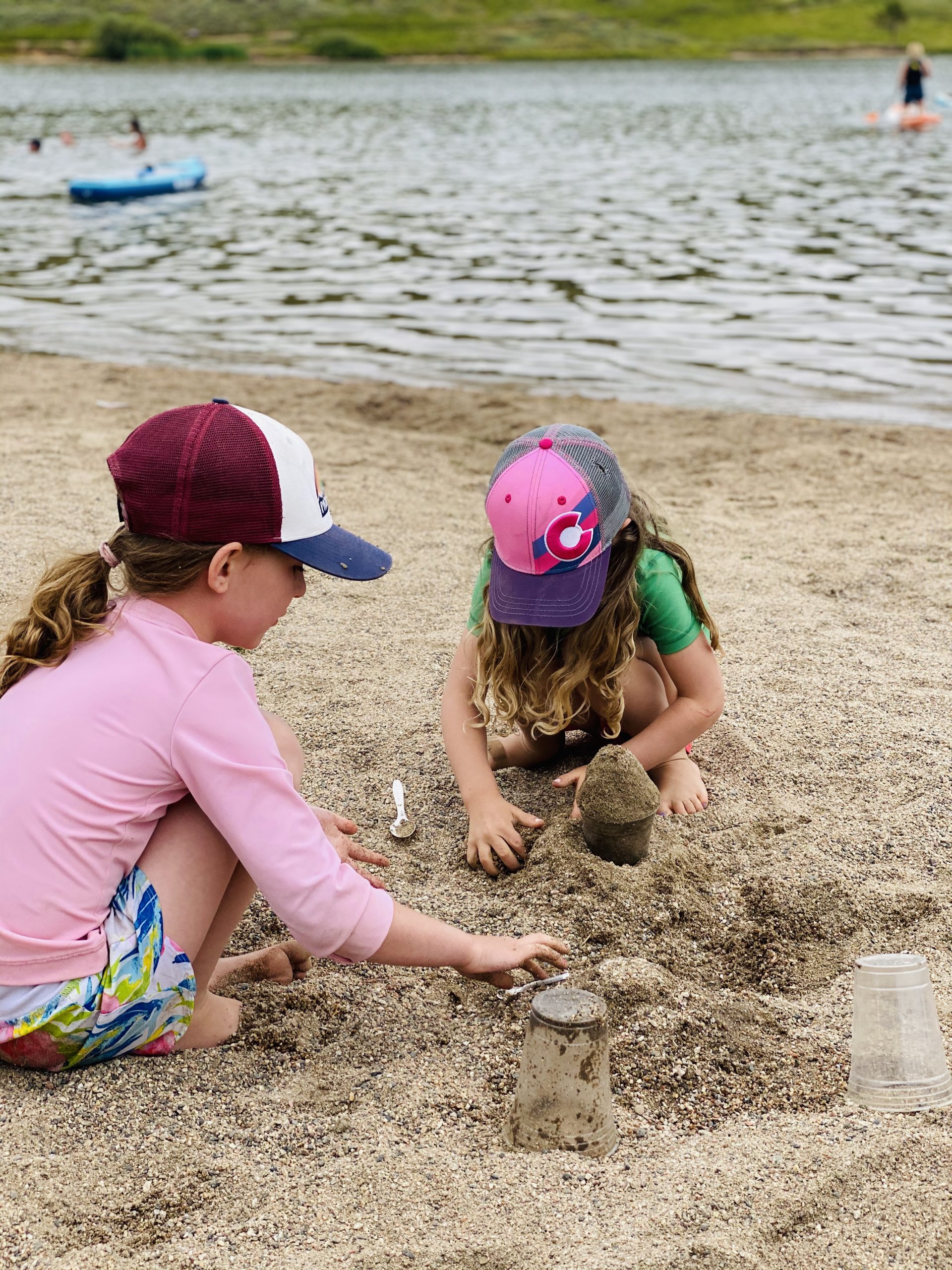 There’s something about camping specifically and being outside that really brings the girls together. They’ve been uncharacteristically fighting the last few weeks. After 4 months of being together constantly, I’m sure they’re just a little sick of each other 😂  and miss their routines and actives they once loved. When we’re hiking, or camping, or building a fire, or even unloading or loading the RV, they’re so present and happy to have an activity. It’s a good reminder to keep their minds busy because it keeps everyone going in a good direction. If I get tired and just want a quiet day to sit or be still God help us all. We need to keep it moving!

We brought along the dogs’ kennels this time and that was key. We set all 3 of them up against the RV under the awning where they had shade so after walking them, that’s where they would hang out and nap. They were so much more relaxed and happy, I have a note to never forget kennels again.

I keep adding trips on for the summer as they become available. There was one lake that just released new dates that I scored today with a great site overlooking the water. Finding sites is the hardest part since people typically do it as soon as they’re released 6 months or a year out- especially for RV sites. Tent sites are much easier to grab and are often open to book last minute.

I have my list of essentials which I’ll post and put on IG (stories and highlights) so they’re easily searchable. Look for that this week, along with a recent decision about homeschool that we’re making that I’m both excited and terrified about. 🥴