A while back, Secret sent me some of their Clinical Strength Anti-Perspiriant and Deodorant, but it just sat in my office since I’m not sweaty enough to need it. I wanted a good, sweaty subject who could really sink their teeth into testing this super-deodorant out the way it needed to be since it was actually designed for athletes (uh, that wouldn’t be me).

Enter Mike. My super-sweaty marathon-running husband who was fresh out of the guy deodorant he has used for years. Since the bottle isn’t covered with flowers and the scent is fresh and not floral, he agreed to try Secret out. Several days later, I noticed that he was still using it in spite of having re-stocked his usual brand. I asked him about it and it loosely went something like this;

Me- Why are you still using my ladies deodorant?

Me- Well does it work better?

Him- Yes, but don’t write that.

Me- I have to write about it, that’s why I had you use it.

Him- Ok, but say that I said ‘It just f*cking works’ so it sounds a little tougher. That’s a good quote.

So my husband loves the Secret Clinical, which actually keeps him dryer and smelling (much) better even after a 16 mile run.  And since none of his friends read HOB (or at least admit to reading) I can blab about it to you.

You probably aren’t half as sweaty as he is so if it works this well for him, I’m positive it will for you too. 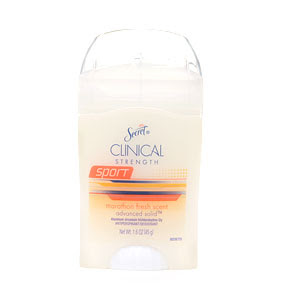