‘Bummed out’ doesn’t come close to describing how I felt when I read this article below in WWD last week about Shu Uemura closing its U.S. opperations. I recently fell in love with their UV Under Base Fluid but now my usage has come to a grinding halt, an odd tactic I sometimes pull so I don’t run out of something I love and fear I won’t see again. It’s on Mona Lisa status where it’s to be admired and not touched.

Don’t even get me started on their iconic Lash Curler which I can’t imagine being without both personally as well as in my kit. It’s a best-seller that I’d love to see remain at least in Sephora stores.

I’m being a touch dramatic of course since you’ll still be able to get their products online, but I’d suggest checking them out in store now while they’re still around so you have an idea about what colors look best on you. 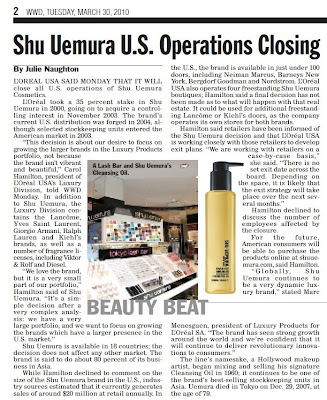 I was relieved to hear that their L’Oreal-owned hair division is to remain available in the U.S. at top tier salons. I can’t imagine how many unhappy women there would be if they weren’t able to pick up their Essence Absolute oil for hair. It’s a  multi-use oil that nourishes and adds tons of shine-  it has also managed to gain a huge celebrity following. Look for new additions to the hair line this month and throughout the year.